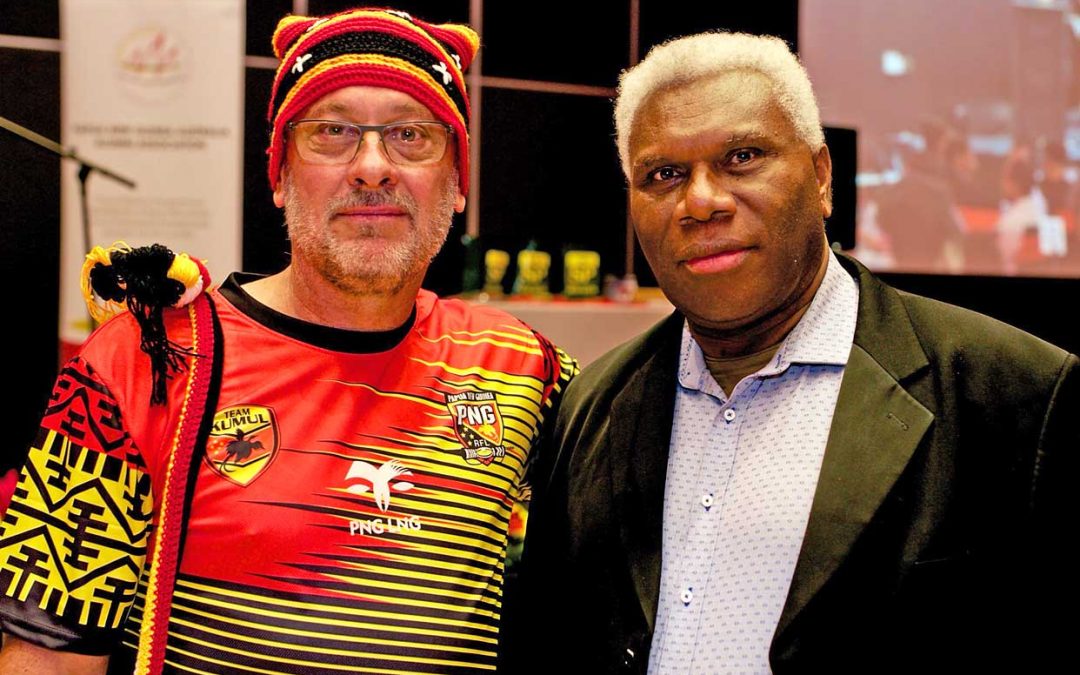 Professor Tim Flannery, an internationally acclaimed scientist, explorer and conservationist, wowed guests at the annual Papua New Guinea Australia Alumni Association (PNGAAA) dinner last night when he talked passionately on how earlier visits had inspired him to give something back to the country.

The dinner is held every year to celebrate the work of the PNGAAA and provide a send-off for the latest cohort of Australia Awards Scholarships awardees.

This year’s theme of “Knowledge to Action: Harnessing Alumni for Sustainable Development” highlighted the PNGAAA’s goal of inclusive and accessible knowledge sharing by alumni that aligns with its values regarding current global issues such as sustainability and climate change.

And so it was only appropriate that one of Australia’s leading climate change experts would be the keynote speaker on the night.

“I had the privilege of meeting in Papua New Guinea, some of the great professors of biology,” said Professor Flannery, talking about travelling to remote villages and meeting with elders as he worked to investigate the native fauna. “They really inspired me to give something back to their communities.

“The key, to me, was to establish genuine trust and to share power so we can both share authority.”

This year’s event also celebrated the achievements of Australia Alumni in Papua New Guinea with the inaugural Alumni Awards that highlighted the work of alumni who have made outstanding contributions to their profession, community and country.

The Innovation and Entrepreneurship Award was won by Dr Joel Waramboi for his ground-breaking SME specialising in import and distribution.

Mercy Masta was the happy winner of the Young Leader Award for being a founder of the PNG Youth Alliance on HIV/AIDS.

And the prized Alumni of the Year Award went to Dr Moses Laman for his outstanding medical research.

“Australia alumni are integral to the future of Papua New Guinea and it is truly exciting to see their contributions formally recognised in these awards tonight,” said PNGAAA president, Dr David Kavanamur, after the presentation.

“This year’s nominees were of the finest calibre and they should all be proud of their achievements, regardless of whether they were selected for the prize.”

Speaking at the event, Minister Counsellor Human Development and Infrastructure from the Australian High Commission in Papua New Guinea, Mr Benedict David, said he was excited to see the launch of the awards.

“I congratulate all the talented people who were nominated for an award tonight, you are exceptional shining stars in Papua New Guinea, and I applaud those of you who will be leaving tonight with an award under your arm,” he said.

Mr David said PNGAAA members ‘rank amongst Papua New Guinea’s finest leaders and achievers’ and acknowledged their part in ‘helping to grow the country’s potential and influence in the Pacific and wider region’.

Another feature of the night was the official launch of the Kainake Project, a sustainable development organisation based in the Autonomous Region of Bougainville.

The project recently formed an agreement with the Neilem Research Group based at the University of Newcastle under the New Colombo Plan. This agreement will allow for their Post-Doctoral Fellows and Honours student to visit Papua New Guinea to conduct research work with the help of the Kainake Project.

It is currently assisting an Australia Awards awardee and a recipient of the 2016 Allison Sudradjat prize, Junior Novera, with the Bougainville-based research component of his PhD.

The PNGAAA would like to thank all the agencies and business houses that helped make the event a success through their support and attendance on the occasion.