Photos of 1970s PNG on Display in Berlin

We had an amazing launch of the European Month of Photography with a Press Conference at the Helmut Newton Foundation building yesterday. Newton has been a prolific portrait photographer who has worked around the world. 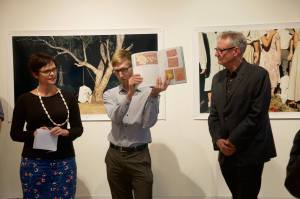 Then we were invited by the Australian Embassy in Berlin where photographic works by Australian photographer Derek Kreckler was on display. Derek did a lot of work in PNG especially around Madang and Sepik in the 1970s prior to independence. Photographic works by Kate Robertson and supported by the Kainake Project was also mentioned by the owner and director of Jarvis Dooney Galerie, Mr. Michael Dooney, during the talk at the Australian Embassy. I had the opportunity to meet and have a conversation with Dr Lauren Bain, who is the Counsellor and Deputy Head of Mission, about work we are doing in Bougainville in partnership with other Australian institutions like the Australian Museum and an upcoming partnership with the University of Newcastle through the New Colombo Plan.

Today we will be at the Jarvis Dooney Galerie in preparation for the opening of our exhibition and book launch on Friday the 28th of September 2018. The Kainake Project is grateful of Mr Michael Dooney for giving us the opportunity to bring this work from Papua New Guinea and be given this level of international exposure. Michael has been brilliant in handling all the information and sensitivities around work that is done in Papua New Guinea and Bougainville communities. 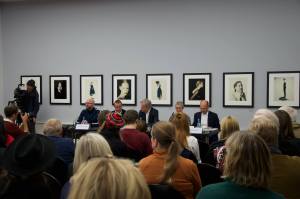 Australia Awards alumnus, Dr Jeffery Noro, founded The Kainake project in Papua New Guinea to help satisfy his passion for biodiversity conservation. He is a natural products scientist with an unyielding passion for biodiversity conservation and research into discovering natural products. He has worked with various drug discovery research groups over the last 10 years in his position as Policy Director for the Papua New Guinea Science and Technology Secretariat, including the International Cooperative Biodiscovery Groups program in Papua New Guinea and in the United States. As a research scientist with the School of Medicine and Health Sciences at the University of Papua New Guinea, he has investigated PNG’s traditional medicinal plants while pursuing his interest in marine microbial natural products.

Dr Noro has a PhD in biological science from the University of New South Wales which he gained through an Australia Awards scholarship.