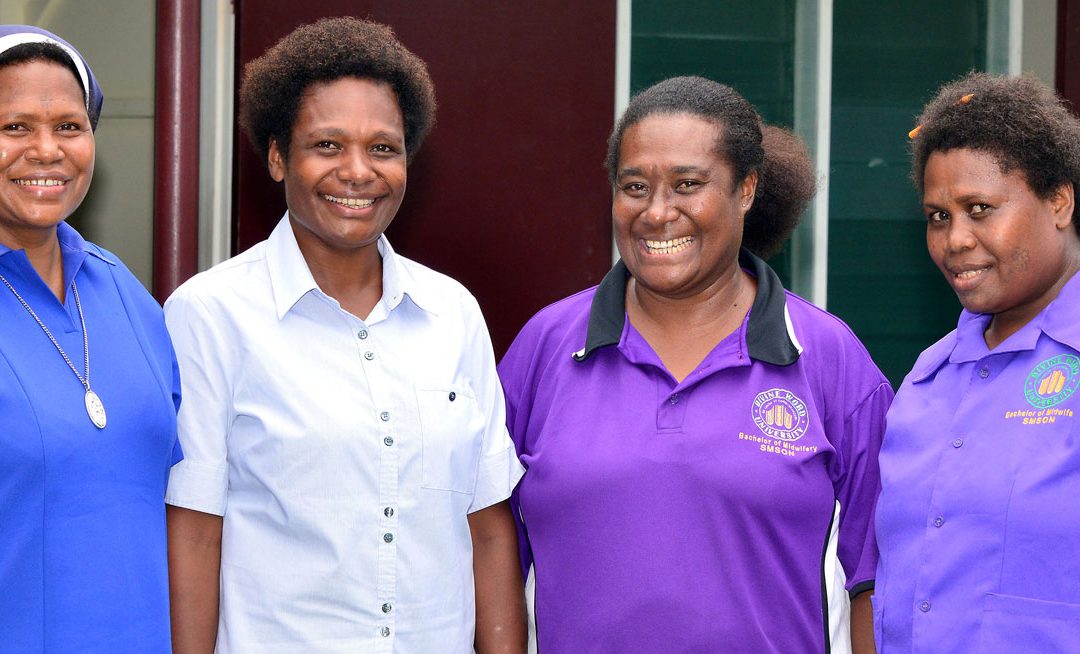 And Rosemary Karapapate’s journey is not much easier. She takes an overnight journey by boat which lands her two hours by car from her posting at the Aona Health Centre in Pomeo District.

These dedicated maternity nurses are just two from the Australia Awards In-PNG Scholarship’s class of 2016 graduating from St Mary’s School of Nursing with midwifery qualifications.

Childbirth in remote areas of Papua New Guinea, where healthcare resources are stretched, can be more difficult than normal. But these new midwifery graduates are using their training to save lives on a daily basis, making maternity a safer prospect for local women from their first day on the job.

“As a practising general nurse at Raunsepna, before my maternity training, I always used to see maternal complications but had to rely on the standard text books to guide me through specialised midwifery procedures to save the lives of these mothers,” says Emma.

“I really needed maternity training. Some of the things I see in our antenatal clinic really need to be dealt with in the hospital. But because of the geographic location, or because they don’t know how to speak Pidgin, or they don’t have enough money, they do not go when I refer them. And so, things like breach deliveries and resuscitation, I am doing all the time myself.” 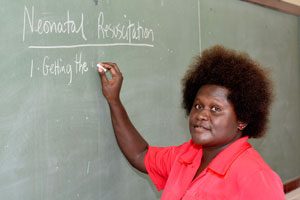 Luciana Mamats
Luciana Mamats from the Autonomous Region of Bougainville was awarded an Australia Awards In-PNG Scholarship to study midwifery over 2015 to 2016. But after graduating she remained at St Mary’s School of Nursing as a tutor.

“Seeing others teaching made me want to teach too. And receiving the scholarship made this possible,” says Luciana.

She is grateful to the Australian Government for her training and now hopes to further her teaching career by studying further.

“It is the best thing, being with students and imparting knowledge,” she says. “I like accompanying them to their hospitals and medical centres too. I get to give them practical training in these situations.

“Teaching is so important. We have a high maternal mortality rate in Papua New Guinea and so by teaching I help to spread the skills and knowledge to help save mothers.

“I am thankful that I received a scholarship to study. Without it I couldn’t have come this far.”

Rosemary agrees that the scholarship has made a marked difference to the level of care that can be given to new and expecting mothers in remote regions.

“Even though I am in a remote place, I’ve got the skills now and the confidence that everything will be okay,” she says. “I have the obstetric skills to identify the potentially problem cases before they become life-threatening.

“Some of our mothers come to the clinic, but when it is time to deliver, due to geographic and climate problems they don’t make it to the delivery ward. So, being able to educate these mothers during clinic visits is very important,” adds Rosemary.

In only her second week back at the Aona Health Centre a woman was carried into the centre by her husband for Rosemary to treat. She had miscarried and had been bleeding for a week.

“She had developed complications and could have died,” says Rosemary. “I was very grateful that I was able to deal properly with that.”

“Yes,” agrees Emma. “Now we have the skills and the knowledge to deal with most maternity complications. We can save lives.”

Sister Brigid Raraiek, also a recent graduate, said before as general nurse, post-partum haemorrhaging was one of the scariest things she had to face. “But now this horrendous situation is something I am fully equipped for after graduating,” she says.

This is a great comfort to Sister Brigid, who took up a position at St Mary’s Hospital’s maternal health unit after graduation. In 11 months alone, she has been involved in approximately 500 deliveries, and dealt personally with 200 or more new mothers.

“I’m very happy now that I’ve come through the course,” says Sister Brigid. “Everything we learned at the school has been happening in our daily work and I have been able to manage.”

Georgina Kiulel who also graduated in 2016 from an Australia Awards scholarship says being an effective midwife is important to her.

“I play many different roles in my work,” she says. “Nurse, educator, advocate and manager. Midwifery is everything to me. I am so glad to be making a difference in these women’s lives.”

And all the ladies unanimously agree that the rewards are great – much more than in general nursing.

There is almost always a positive outcome and a sincerely grateful mother at the end.

And between them all, they are making a big difference to the lives of many women, and many unnecessary maternal deaths are being avoided.