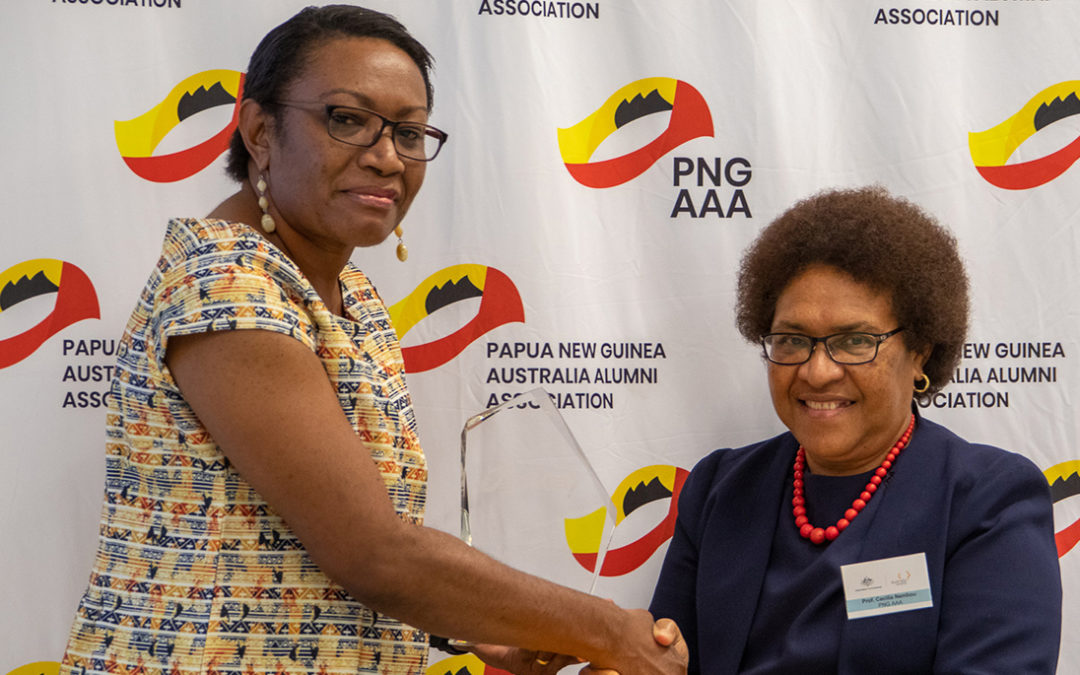 Mrs Gertrude Tamade Elai hails from Taemigidu village in Morobe Province, Papua New Guinea. A lawyer by profession, she completed a Master’s in Law at the University of Melbourne in 2015 together with her husband a fellow alumni and is currently working as the Senior Legal Counsel with Barrick (Nuigini)Ltd.

It was Gertrude’s passion both and beyond her profession that proved to be outstanding and worthy of recognition for the Papua New Guinea Australia Alumni Association’s 2018 Alumni of the year award, presented in Port Moresby on 19 July.

Whilst undertaking studies in Melbourne, Gertrude took up a part-time job to assist the Field Methods Class of the Language Department at the University of Melbourne under the guidance of Professor Rachel Nordlinger. From this engagement and with the assistance of the University of Melbourne and the ARC Centre of Excellence for the Dynamics of Language, they were able to complete a Children’s Book called Songgoleng Kom Kumwa Nei (Frog where are you) in her local language, Taemi.

After returning to PNG, Gertrude presented the Children’s Book written in her language to the people of Taemigidu. She also presented to them the work done with the University of Melbourne which resulted in a Taemi Dictionary containing basic Taemi words. The Taemi digital language dictionary is now stored on the PARADISESEC (The Pacific Regional Archive for Digital Source in Endagered Cultures) website which was also possible with the assistance of Associate Professor Nick Thiebeger at the University of Melbourne.

This method is the first of its kind in working with students abroad to record a language in Papua New Guinea, helping to inspire others in the country to preserve their languages and cultural identities in an online platform that can be accessed by future generations. The online database also enables Taemi speakers to constantly add to the database new and or old words and phrases in Taemi.

Gertrude is also elated that the Project on recording her language has also inspired one of the Field Methods class to write her theses on the study of the Taemi Language. Gertrude thanks the efforts of Catherine Zisserman on her thesis, “Mood and Tense in Taemi” which further documents the language in the academic space.
Gertrude maintains links with Australia through engagement with the University of Melbourne’s Language Department and the ARC Centre of Excellence for the Dynamics of Language.

Gertrude says that the “Taemi Project” could not be possible without the keen interest of the 2015 Field Methods class at the University of Melbourne and dedicates the award to all the small feet running around on the white sand of Taemigidu village. Last but not the least, Gertrude thanks the Australia Awards and the PNGAAA for the recognition.