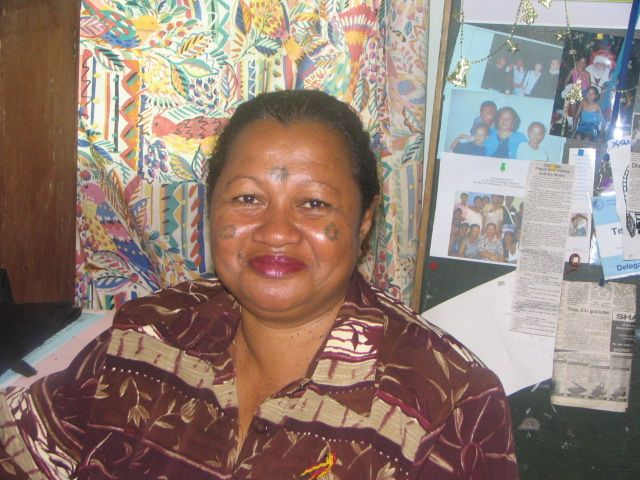 Social Work Graduate from the University of Papua New Guinea; founder of “Friends Foundation”; and the woman known nationally for her willingness to give unclaimed babies who have died from HIV/AIDS a decent burial, Ms Tessie Soi originally thought she’d become a teacher.

“I was all ready to become a teacher, but then I suppose one of my favourite uncles – a committed welfare officer –influenced my life path and I took up social work instead”, Ms Soi said.

Born in Gaba Gaba Village in Central Province just two days after Christmas, and the eldest girl in a family of seven children, Ms Soi feels the best part of her work is the satisfaction she gains every day from helping people.

“We certainly travelled around a lot of the country when I was younger. Dad used to be with the Stores Department so amongst many other places I can fondly remember my time in Wewak, Vanimo, Madang and Lae”, she said.

Ms Soi came into Moresby from Lae to do her secondary schooling at Gordon’s High School, and then went on to do the Year 11 & 12 Preliminary studies at UPNG.

Continuing her studies at UPNG in Social Work, Ms Soi graduated and started working at the POM General Hospital in 1984.

“I remember early in my work a frail young fellow coming into the General Hospital from Mt Hagen. He had a severe heart problem and was going to die very soon if he didn’t have an urgent operation”, she explained.

“In those days, patients with complex medical problems were often transported to Australia for life-saving operations. “He was going south to have a pacemaker fitted.”

“I went out to the airport two months later to pick up some returning patients. I got such a shock when this healthy young man I couldn’t recognise picked me up and did a little dance with me in his arms. I just couldn’t see in him the patient we’d sent off earlier.”

“‘Because of you and your colleagues I’m alive !’ he shouted.“ ‘Now I can walk around so easily, care for my garden properly and get married’, he said.”

“That experience really sent my pace going and definitely set my life’s destiny”, she said.

In 1989 Ms Soi was offered a six-month attachment to Townsville General Hospital. It was here that she started to see the ravages of HIV/AIDs on some Townsville patients, many of them drug users.

On her return and with extra confidence, she felt strong enough to question prevailing wisdom about managing HIV/AIDs patients – and ask some of the ‘hard’ questions.

“Remember that this was in the early days of HIV/AIDs and many people were terribly afraid of becoming infected. “There was only limited knowledge of the virus and even people in the health sector weren’t well informed.”

“People wouldn’t even cook in the same saucepan as people infected with HIV/AIDs, and we were now helping three or four times as many sufferers each month as we had treated in the past”, she said.

One young man she remembers well had a wife who was eventually diagnosed as HIV/AIDs positive, contracted from her previous husband.

His wife had delivered their baby at the Hospital, but after many weeks her condition was not improving. He kept on asking doctors what was wrong with her.

“When he was told she had HIV/AIDs and was too far gone to help, this big Papua New Guinea man seemed to shrink before my eyes.”

“From my own life and experience, I knew what a person does and does not want to hear at times like this. “So I just sat there quietly with him. “After 15 minutes he told me the doctors had explained that his wife would die within two weeks.”

“He said: ‘I know she will die soon, but with my love and care I will prove that she will live longer than two weeks.’, “, Ms Soi explained.

“That day he took his wife and newborn child home.”

“After two weeks he came back for the results of his own tests, which were negative, and he said to me ‘She’s still alive’.”

The husband came back in six weeks to tell us that his wife was still alive… he buried her after eight months.

“His positive attitude gave me hope and I knew then that this was an area I must go into”, Ms Soi said. “That’s how I started to be involved in HIV/AIDs care.”

She knows that people’s understanding of HIV/AIDs has definitely improved over the years. But lack of knowledge in the early years caused terrible things to happen, according to Ms Soi.

“In the early days I remember a young woman in an advanced stage who had just delivered her baby at the hospital. “She was only 19 and didn’t have enough kina to return to her village with her daughter.”

Ms Soi found some money to PMV her back to her village, but the young mother was immediately sent away by her villagers because of their own fears and lack of knowledge.

“That same day she returned to the Hospital – she died there that night.”

But gradually people’s awareness and informed knowledge of HIV/AIDs improved.

In 1985, Ms Soi married a lawyer and he helped her set up “Friends Foundation”. Starting in their own home and later moving into a low-rent warehouse in Waigani, “Friends” was launched at Parliament House in late June 2001, with a focus on helping the person suffering.

“We give them a push towards the uphill road, not the downhill one”, Ms Soi explains.

In 2002 and 2003 she completed her Masters under the ADS program at James Cook University in Townsville.

Returning to Port Moresby , Ms Soi at first thought that there was no need to continue “Friends” as there seemed to be enough support from other organisations.

But four women came to see her one day and explained that, even though there was much-welcomed support from other organisations, there was still “something missing”. This was when she decided to re-energise “Friends”, but this time with a focus on mothers.

Last year, during some of the regular PPTCT therapy sessions “Friends” runs, she and her colleagues found there were more and more grandparents coming along to sessions, as both parents had died and they were caring for the orphaned children.

“But “Friends” found there was an increasing number of people who wanted to help. “So a year ago we started BSP – the Buddy System Program where people who can afford it contribute 20 kina each month and pay small annual school fees to help a child’s grandparents care for the children.”

“That 20 kina helps the grandparents to keep the children out of an institution and in the family home”, she explained.

But there are so many families who need help that the Foundation has to be very specific about who it can assist. When someone comes to “Friends” for help, they will only get involved if both parents have died from HIV/AIDs, and both have died prematurely. In this way “Friends” feels it can target an area of greatest need.

The postgraduate studies Ms Soi did at James Cook University gave her a focus and a commitment to assisting families of people with HIV/AIDs.

“I eat, sleep and walk HIV/AIDs”, she explains.

“But I’m happy that my friends, my family, the Friends youth task force and I have made a difference to a lot of people’s lives.”

“Just take the time”, Tessie Soi advises, “to remember who your friends are.”