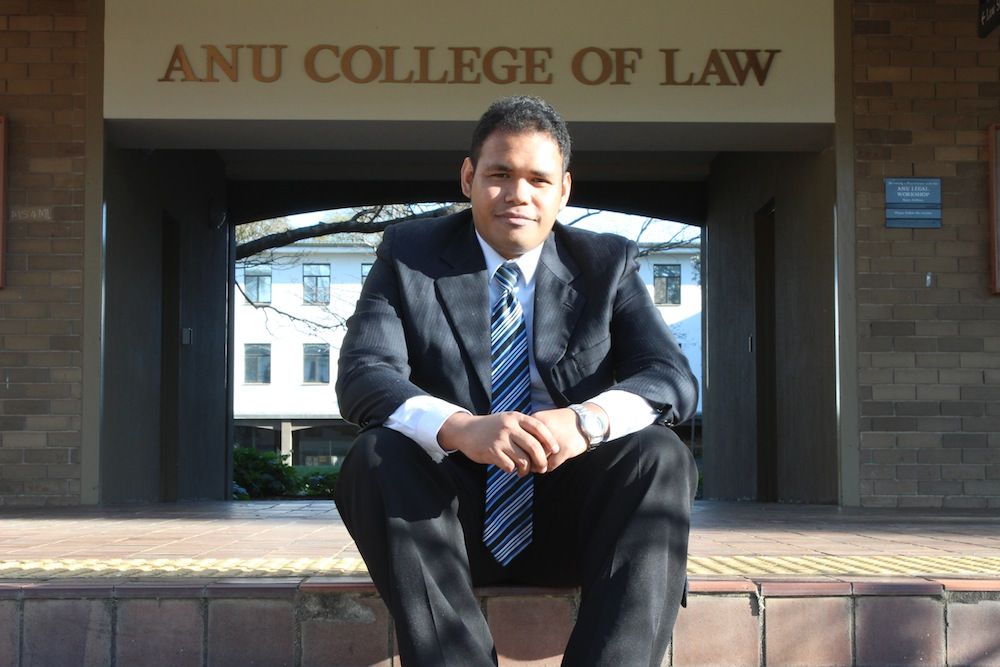 Masters of Laws – Australian National University Canberra, 2012 – Tauvasa commenced his studies in January 2012 at the Australian National University (ANU) and completed his study program on 20 December 2012. He is due to graduate in July 2013. While studying in Canberra Tauvasa worked with the Australian Government Solicitors for three (3) months.  He will be going back to Canberra to commence his work placement/ attachment on 29th April 2013 with the Law Council of Australia as part of the Prime Ministers Pacific Award (PMPA) for three (3) months.

Tauvasa says, ”I am very grateful to AusAID for giving me the opportunity to go down to Australia to study”.

Below is an extract by The Pacific Institute, December 11, 2012.

The Prime Minister’s Australia Awards provides students with the opportunity to immerse themselves in the academic and social culture of their host country through research, study and work placements, including internship placements.

Tauvasa Tanuvasa Chou-Lee was born in 1982 and raised in Port Moresby where he attended an international primary school, Tokarara High School, Port Moresby National High School and then the University of Papua New Guinea (UPNG). He graduated from UPNG with a Bachelor of Laws degree with Honours in early 2005 and was admitted to the PNG Bar at the end of that same year after completing training at the PNG Legal Training Institute. In early 2006 he joined the Office of the Solicitor General, in Papua New Guinea’s Department of Justice and Attorney General. In 2011, he was awarded an Australian Development Scholarship (ADS) to pursue a Master’s degree in Law specializing in Government and Commercial Law. Tauvasa completes his degree at the end of this year and will return to PNG to re-commence his work as Deputy Solicitor General (State Defence) in the Office of the Solicitor General.

Tauvasa is passionate about his profession and hopes that the experiences he will gain through work experience supported by the PMPA scheme will help him make a significant contribution to efforts to improve the Office of the Solicitor General and the Department of Justice and Attorney General as a whole. With around 20 lawyers and an average load of around 400 cases per lawyer, lawyers in the Office of the Solicitor General need all the help they can get. Tauvasa notes “with charging and recovering costs that his office simply cannot cope with the current caseload and that they at times brief out matters to private law firms through the Attorney General often at great expense.” He is particularly concerned with workloads caused by serial litigants with often vexatious claims. Tauvasa feels keenly the responsibility of his office and recognises that “every time we lose a claim, we lose taxpayers’ money – money that could be spent on development, on improvements to peoples lives and livelihoods, especially in the rural areas where basic services and infrastructure are much needed.” He strongly believes that by working for the state (the primary client of the Office of the Solicitor General), he is working for the people of Papua New Guinea. He aims to help create a Government Legal Enterprise in PNG (an entity akin to the Australian Government Solicitor), which may advise and represent the Government of Papua New Guinea in courts and tribunals and help to de-politicise the work of his Office and that of the Department of Justice and Attorney General in the country.

Tauvasa is dedicated to his work in Papua New Guinea, even though the rest of his family live in Samoa. A citizen of PNG, he is one of a growing number of young Pacific Islanders whose familial connections span the Pacific Ocean. His Mother is from Central Province (with family from Baluan Island, Manus Province) and his Father is of chiefly Samoan (Tanuvasa from Manono) and Chinese ancestry. Tauvasa knows that this mix of culture, tradition and identity can be confronting for some, but for him it is about recognition of family and, as one Samoan saying goes, “People have more roots than trees.”